S-3 EUROHAB will develop a web based Harmful Algal Bloom and Water Quality alert system that uses satellite data to improve the ways in which these parameters / phenomena are monitored. The system is being designed by scientists in collaboration with stakeholders, in particular marine managers and shellfishery end users.

The S-3 EUROHAB project will use data from the recently launched European satellite, Copernicus Sentinel 3, to track the biomass and spread of HABs in the Channel. In addition, the system will also be used to monitor water quality. The satellite data will then be used to create a web based alert system, the first of its kind in Europe, to alert marine managers and fishing industries of the growth of potentially damaging algal blooms. Data will also be gathered to help better understand why, how and when HABs occur as well as the economic costs associated with HABs and poor water quality and how the web based alert system may reduce these costs. 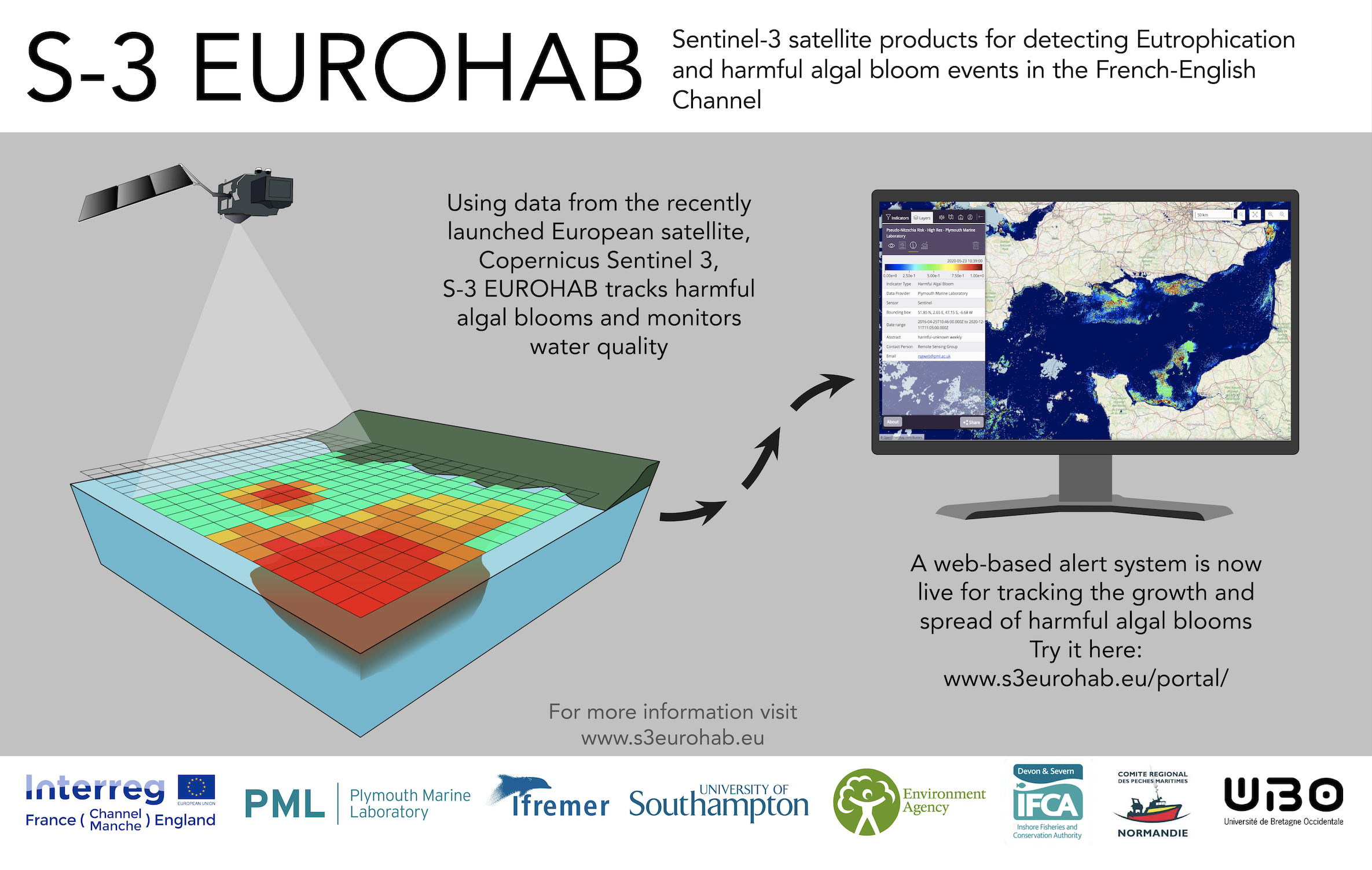 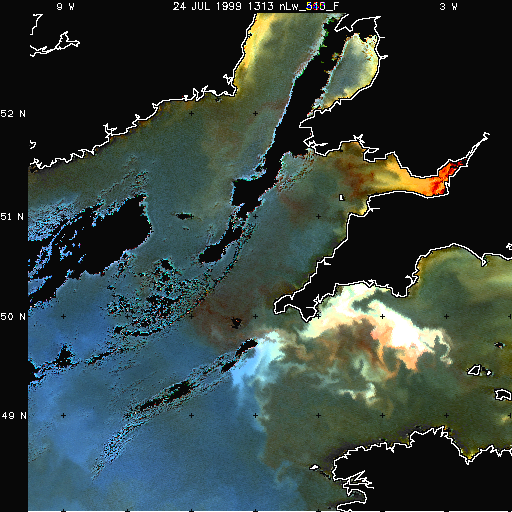 Harmful Algal Blooms (HABs) are caused by excessive growth of marine algae which release harmful toxins into the water that can kill fish, shellfish and even humans when they consume contaminated fish. As a result they can have an extremely damaging effect on the tourism and fishing industries. In the EU, the annual cost of HABs to these industries is estimated to be in excess of 918 million euros. Poor water quality can also affect our coastal regions, which can adversely affect a number of maritime industries. For example, eutrophication is the anthropogenic enrichment of water by nutrients causing accelerated growth of algae and a deterioration in water quality.

Current methods of tracking HABs are expensive, costing 2 million euros annually to monitor just 6% of the Channel area. S-3 EUROHAB’s methods will not only cost significantly less, but will also cover the whole Channel area. The alert system will also result in much faster response times to HABs, potentially helping to mitigate the blooms which will help to reduce the millions of pounds lost each year as a result of HABs in both France and the UK. Improvements to existing methods will be made using satellite ocean colour data and in particular the application of the latest technological advancement in, and recent launch of, the European Copernicus Satellites. The project will use these satellite data to create a web based HAB and water quality alert system that will be designed alongside marine managers and industry end users to enhance the marine monitoring of HAB’s in the French-English Channel region.

The project budget is partially funded by the Interreg France (Channel) England programme, by the European Regional Development Fund. The project is made up of 9 organisations, 5 from France (IREMER-Brest, IFREMER-Port-en-Bessin, IFREMER-Boulogne-sur-Mer, Comité Régional des Pêches de Basse Normandie Universite de Brest) and 4 from the UK (Plymouth Marine Laboratory, Environment Agency, University of Southampton, Devon and Severn Inshore Fisheries and Conservation Authority), and will run from November 2017 until October 2021.


Some key facts about the project...

S-3 EUROHAB will work with shellfishermen to develop new approaches to help manage harmful algal bloom and water quality related risks to their industry, to help minimise potential impacts on their business. Additionally, stakeholders and decision-makers from other sectors, for example, the tourism and recreational sectors, may be impacted by the presence of HABs. 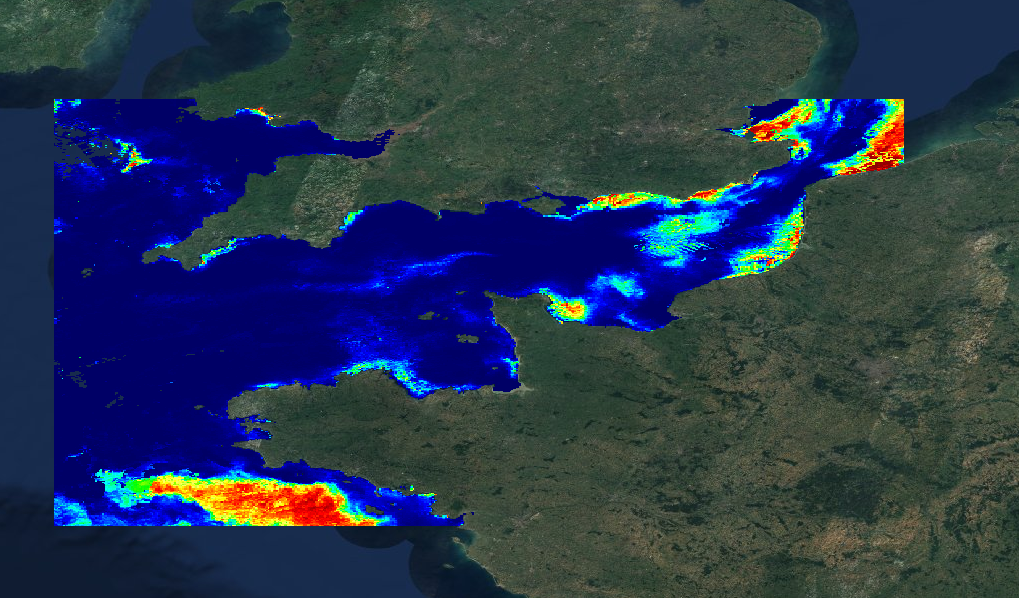 S-3 EUROHAB has produced a web based alert system for a selection of the most important Harmful Algal Bloom Species. Currently the system provides data covering;

Images in the portal are provided in near real time so data up to a few days ago should be available. For more information on the Web Alert System please see:

Fish Farming Magazine: "Eye in the Sky: Satellite technology is the latest weapon in the battle against harmful algae"

Harmful Algal Blooms and Eutrophication are a common environmental problem in Europe. Both of these are currently monitored by coastal boat surveys and determination of phytoplankton species and associated toxins in water, fish and shellfish. If toxins exceed specified thresholds, large areas of the coast, shelf and estuaries are closed for harvest. Harmful Algal Blooms and Water Quality cannot be predicted and marine managers can only act on these events after they have happened. Current in situ monitoring under the Water Framework Directive only covers 3% of the total French-English Channel region. The monitoring sites are fixed and there is no current possibility of reactive sampling due to a lack of information. This limits the ability to track the dispersion of blooms from area to area, especially in the shelf waters of the Channel. The impacts of HABs are often worse on the French side of the Channel due to accumulation of phytoplankton caused by the prevailing currents and larger nutrient inputs to the coast from rivers.

The project is developing a cross-border data portal that includes both in situ monitoring data and data from the recently launched Copernicus Sentinel 3 (S-3) satellite available from the EU’s Earth Observation and Monitoring Programme. The data portal will be used to assess the principal drivers, dispersion and transport of key Harmful Algal Bloom species throughout the French-English Channel. 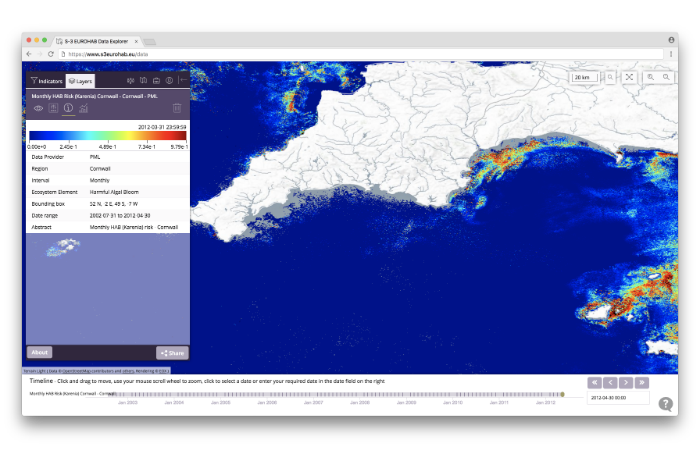 The data portal will also be used to develop a web based alert system to provide marine managers and the fish and shellfish industry with more detailed information on the whereabouts and potential dispersion of HABs in the Channel region. This will enable a quicker response time to closing certain areas affected by Harmful Algal Blooms for harvest, whilst allowing other areas to remain open, thus reducing the economic impacts on the industry. Other parameters that are useful for promoting the growth of spats to increase shellfish productivity will also be included in the alert system. A socio-economic survey of the cost of poor water quality and HABs and the benefit of using the web based alert system will be conducted.